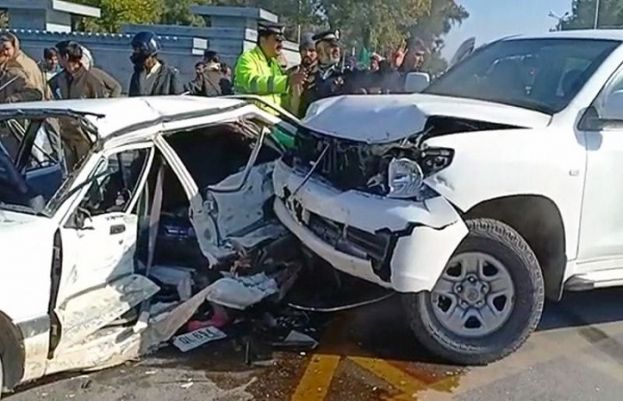 A woman was killed and five others sustained injuries when a vehicle of the United States embassy collided with a car in Islamabad on Sunday, police said.

The accident took place near Faisal Avenue Chowk on Margalla Road when the US embassy vehicle, a Toyota Land Cruiser, collided with the car coming from the other direction. The incident reportedly occurred due to one of the vehicles breaking the signal.

The injured and the dead were shifted to the Pakistan Institute of Medical Sciences (Pims), where the deceased woman was identified as Nazia Bibi. According to a police spokesperson, a minor girl who was injured in the accident is in critical condition.

Police said the US embassy vehicle was being driven by a Pakistani driver named Amjad Zaman; it wasn’t immediately clear if there were other people in the car. Margalla police arrested the driver and registered a first information report (FIR) of the incident.

Police also seized the US embassy vehicle involved in the accident.

“Action will be taken against the suspects as per the law,” the Islamabad police spokesperson said.

According to the FIR registered on a complaint of deceased Nazia Bibi’s son, Usama Khaliq, the family was travelling to a funeral in its native village of Kohala Haripur when it met with the accident.

Usama, who was not in the car, stated in the FIR that when his family members reached Faisal Avenue Chowk in the Suzuki Khyber car at around 10:15am today, a white Land Cruiser coming from the F-10 sector towards F-7 hit the car “with extreme carelessness and at high speed”.

As a result, the occupants of the car including both of Usama’s parents, cousin Shakeel (who was driving the car), his wife Nabila, and their two children sustained serious injuries, the FIR said. Usama’s mother later succumbed to her injuries on the spot.

The complainant sought legal action against the Land Cruiser’s driver, saying the incident had occurred due to the latter’s negligence.

In recent years, several traffic accidents involving vehicles of the US embassy and consulates have taken place in various cities.

In April 2018, a motorcyclist in Islamabad was killed after being hit by a vehicle driven by the military attaché at the US embassy in the capital.

In February 2013, an administrative assistant at the US embassy hit two motorcyclists with his Land Cruiser near Kohsar Complex at Margalla Avenue. A man was killed and another was injured in the accident.

In July 2010, a US embassy officer attached to the embassy’s Force Protection Department hit and killed a young man riding a motorcycle on the 7th Avenue.

In 2011, a Central Investigation Agency contractor, Raymond Davis, caused outrage throughout the country after he killed two Pakistani citizens when he hit a motorcycle in Lahore. The incident had strained ties between Pakistan and the US. Davis was led out of the country after blood money was paid to the families of the victims.