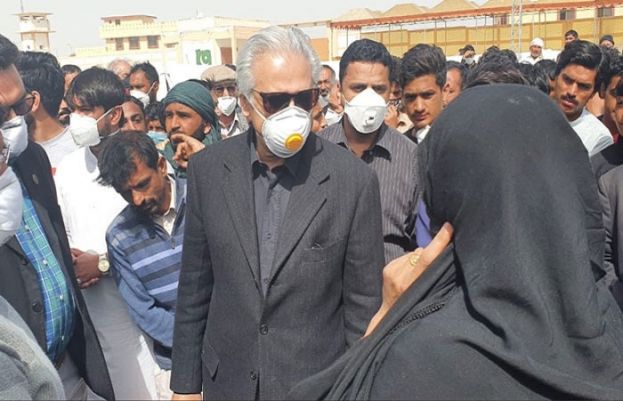 Special Assistant to Prime Minister on Health Dr Zafar Mirza said on Friday that the government now has a plan to deal with the situation of pilgrims coming to Pakistan from Iran, which has been hit with the coronavirus epidemic.

Dr Mirza said he has reviewed the situation at the Taftan-Zahedan border.

During his visit, the health adviser said that the over next few days the authorities will gradually allow Pakistani ‘zaireens’ or pilgrims returning from Iran to enter the country, after full health screening.

He further said that the point of entry is being strengthened.

Pakistan on Sunday had sealed its border with Iran and declared emergency in border districts.

On Wednesday, Pakistan recorded its first two cases of coronavirus, with one each being in Karachi and Islamabad. The patients had returned recently from Iran.

Earlier, Dr Mirza said that the two patients were stable and their condition was improving. “Contacts traced until now and tested are all negative,” he added.

The 22-year-old had arrived in Karachi on February 20, indicating that there were chances that the thermal screening machines at the airports for those entering the country may not have worked after all.

The machines are supposed to immediately detect higher-than-usual body temperature.

A day earlier, Iran had reported seven new deaths from the coronavirus infection in the country over the past 24 hours, taking the death toll to 26 as the country struggles to contain the spread of the virus both at home and beyond its borders.

Health Ministry spokesman Kianoush Jahanpour also told a press briefing that 106 more cases of the disease had been confirmed, raising the tally of infections to 245, the highest outside China where COVID-19 originated.